The other day, I was having a discussion with a friend about how there seems to be a growing divergence between the movies that most Americans see and those that the Academy honors with a Best Picture (or, really, any) nomination. It’s certainly true that, for as long as I have been paying attention, the Best Picture nominees in a given year have not typically been among that year’s top-grossing films. But I was curious the extent to which this is a new phenomenon.

Hence, the following figure. I’ve gone through the top ten–performing films at U.S. box offices in every year since the Academy Awards began—the first Oscars recognized films released in 1927 and 1928—and I’ve marked which of those films received Best Picture nominations. For most of the history of the Oscars, there were five Best Picture nominees per year (actually, for the first Academy Awards, there were only three), but for twelve years in the ’30s and ’40s, as well as for the past six years, there’ve been closer to ten (though the exact number has varied). I thought it best to differentiate between years in which there were only five nominees (marked in red) and those where there were more (marked in yellow). I’ve also denoted with an “X” the films that went on to win Best Picture.

Before we go on, a few interesting facts relating to this figure:

The main takeaway point from this figure, though, is that the separation between Oscar-worthy movies and very popular movies seemed to start about three decades ago. As recently as the 1970s, it was not uncommon to have three or even four of the Best Picture nominees among the year’s top ten–grossing films. We see the color in this figure start thinning out in the 1980s, and by the mid-2000s, there are five consecutive years where none of the Best Picture nominees is in the top ten. Indeed, after 2003, it was not until the Academy raised the allowed number of nominees to ten, in 2009, that a top ten–grossing film again earned a Best Picture nomination.

Obviously, a lot’s changed in the motion-picture industry since the ’70s, and really getting to the bottom of this trend is probably a complicated ordeal. Most of this shift is likely explained by the increase in the sheer volume of films that have been released in more-recent years—especially superhero flicks and other major franchise movies—but there’s probably lots of other stuff going on, too.

This train of thought led to the following set of images. I wanted to answer the question: What’s happened over time to the share of the U.S. population that actually sees the Oscar nominees for Best Picture? This proved to be a time-consuming inquiry, so I only examined the Best Picture winners. To estimate the share of the U.S. population that watched a given film in theaters, I took the U.S. box-office gross for the film and divided that by the average cost of a movie ticket in the year the film was released. This gives an estimate for the number of U.S. tickets sold for that film, which is a decent proxy for the number of Americans who saw that film in theaters. (Obviously, this ignores things like people seeing a movie multiple times, or non-U.S. residents watching movies in the United States, but we’ll call it close enough for this exercise.) Finally, I divided the number of Americans who watched a given film by the U.S. population in the year the film was released to get an estimate of the percentage of the population that saw the movie.

Okay, with all that said, here’s the first graph. (For the full data table and a description of sources, see the bottom of this post.) 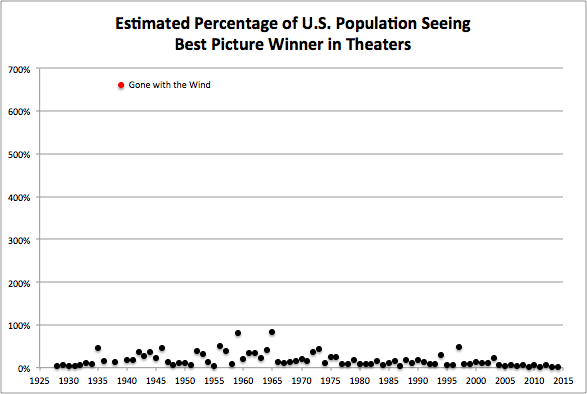 Turns out Gone with the Wind ruins everything. This graph would suggest that the average American saw the film 6.6 times when it came out in 1939—which, obviously, seems ridiculous. I spent a fair amount of time trying to figure this one out, and I think what’s going on is that Gone with the Wind’s initial release lasted four years, and it was re-released eight times. All of the U.S. tickets sales from those releases—which are spread out over five decades—are included in its domestic gross total, and this makes this calculation a bit nonsensical for Gone with the Wind.

So let’s go ahead and take it out and zoom in on all the data points below.

Things are looking a little cleaner. Still, there are a few outliers, most notably, The Sound of Music and Ben-Hur, which, according to this calculation, more than 80 percent of the country saw. The left side of this graph is also fairly noisy, and less relevant to what’s been going on over the last few decades of American movie history, so let’s just look at 1960 onward and zoom in further to where the vast majority of the dots are clustered. 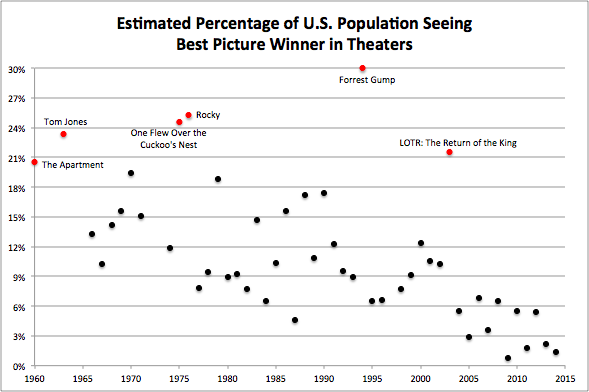 Now the trend is pretty clear. In 9 of the last 11 years, less than 6 percent of the U.S. population watched the Best Picture winner. During the entire period going back to 1960, this happened only once prior, The Last Emperor in 1987. If Birdman or Boyhood wins tonight—which, according to FiveThirtyEight, is overwhelmingly likely—either of those films would be the second least-watched Oscar winner ever, after The Hurt Locker in 2009.

This quickly became more quantitatively involved than I intended when I set out to write this piece, but after following this analysis to something of a conclusion, I think two things are clear. Yes, the movies that are most likely to be consumed by Americans are becoming increasingly less likely to earn Oscar nominations. And, yes, a shrinking percentage of the American population is watching the supposedly best American movies.

Finally, I’ll deliver on the promise of my title: a discussion of why the Oscars matter—today more than ever. And, from here on out, it will be short(ish).

But there’s another side—a much more important one—to the Oscars that probably doesn’t receive the credit it deserves. The Academy Awards are an institution that, every year, suggests five to ten films for Americans to go see and think about and discuss. And there is an inherent value, I believe, in lots of people in our society all grappling together with the same questions. I thought American Sniper lacked a basic self-awareness of the jingoism that pervaded the movie, but other people I’ve talked to said they saw it as being squarely anti-war. I thought the portrayal of LBJ in Selma was one of a reluctant ally who eventually finds himself on the right side of history, but many others saw him as being more antagonistic toward the Civil Rights Movement. I think it’s good that the Oscars spur these sorts of discussions.

The quantitative analysis in this post—which, although not something that I’d want to submit to the editors of the American Economic Review, is nonetheless fairly straightforward—confirms my suspicion that started this line of inquiry: that the best American films today are not being watched by as many people as their counterparts several decades ago.

If not for the Academy Awards, I suspect this trend would be even more exacerbated. The amount of media—film, television, random things on the Internet—that one has the ability to consume is increasing every day. And the number of hours in each day remains stubbornly constant. If Birdman or Whiplash hadn’t received Oscar nominations, I think it’s unlikely I’d have gone to see them. It’s not because I don’t enjoy good movies; it’s just that I have a surplus of content available to me, and I probably wouldn’t have had the cause to seek them out. I know of many people who operate similarly, who every year make a point of seeing the Best Picture nominees specifically because they are Best Picture nominees.

Perhaps with the effortlessness of finding information on the Internet, it’s becoming easier for someone more proactive than I am to find and watch high-quality films. But with the Internet has come a stratification, a sorting of people into niches and types. What’s valuable about the Oscars is that it leads lots of people to watch the same high-quality films. It creates a nation-wide book club of sorts that is open to anyone who’d like to join. Three or four decades ago, there was less need for this club, since the movies the Academy was choosing were already the ones that lots of people were seeing. But, today, if not for the Oscars, how many good movies would be widely seen by a non-trivial proportion of the population? (Even 1 or 2 percent of the U.S. population, after all, while perhaps a far cry from the 10 percent that was the norm in the ’80s, is still non-trivial.)

And with this growing importance of the Oscars, it’s all the more reason why we should be concerned how disproportionately white and male the Academy is.

And finally, all this is to say nothing of the question: With the shrinking financial incentives for studios to make high-quality movies that appeal to critics, if it were not for the Oscars and other award programs that trade in Hollywood’s economy of prestige, would studios even want to continue making such movies?