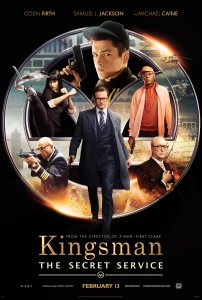 I went on a pretty big classic James Bond movie kick when I was in grade school. Like most people, I was drawn to the action, intrigue and the simple coolness that Bond has always exuded. That appeal declined as Pierce Brosnan was nearing the end of his reign as 007 but my interest in spy movies was reborn with the tough, gritty, and semi-realistic Bourne movies and Daniel Craig’s similar reinvention of Bond. But Kingsman: The Secret Service eschews the recent shift towards dark realism, instead embracing flash and extravagance with a strong dose of self-awareness… a decision I found myself curiously appreciating.

When a member of the Kingsman, an ultra-secret intelligence agency, is killed during a mission, Harry Hart (Colin Firth) and the other Kingsman begin the search to identify his successor as well as his murderers. These simultaneous searches lead them first to Gary “Eggsy” Unwin (Taron Egerton), a troubled young man with family ties to the Kingsman, as a replacement and then to Richmond Valentine (Samuel L. Jackson), an internet billionaire whose philanthropist public persona masks something far more sinister.

As alluded to, Kingsman isn’t interested in telling a “realistic” or “grounded” spy story and makes no illusions about this fact. But while I think that some of the conventions of the spy genre lean too often towards the side of “cheese”, Kingsman manages to maintain a notable level of gravity beneath the over-the-top stylish action sequences and the natural and timely bits of comedy. Looking back at the film with the knowledge that Matthew Vaughn directed it (of Kick-Ass and X-Men: First Class fame), the amount and quality of spectacle in the film is less surprising. Not that that diminishes anything about the movie. But just to get a sense of what the action in Kingsman is about, the insanity and scale of one of the most pivotal action sequences immediately reminded me of the Bride’s fight with the Crazy 88 in Kill Bill Volume 1… which I consider a rather significant positive.

A huge part of the film’s strength is in its villain (a reality that the filmmakers demonstrate strong cognizance of by having characters discuss the recent decline of fun, interesting and ultimately crazy bad guys in movies). Samuel L. Jackson’s Valentine is a charming and funny megalomaniac with a heavy and almost distracting lisp. But what’s really great about this character (and his plan most specifically) is that his twisted and disturbing logic is actually kind of easy to follow (or maybe I’m just crazy, too). The best kinds of villains are the ones that can actually offer up cogent arguments for why they want to execute whatever their dastardly plans are and Valentine doesn’t disappoint on this front, which is a huge credit to the writing and Jackson’s performance. Also, it’s interesting to consider Valentine as an eventual possible outcome for Mark Zuckerberg (in the darkest timeline, at least).

Colin Firth is pretty low on the list when you think of action movie stars, but he somehow really delivers as the near-unstoppable Harry Hart, making one easily forget that this pasty English dude also played the stuttering King George VI in Best Picture-winner The King’s Speech (Sorry, Citizen Kelvin). The action sequences are awesome on their own merits, but then having the antithesis to what has become the action hero cliché be the agent of that action catapults it to another level of entertainment. It was so strangely unexpected but so, so satisfying and I’m pleased by the choice.

The rest of the cast was strong, which contributed significantly to the film’s world feeling fleshed out. Relative newcomer Taron Egerton was entertaining and exciting as Eggsy (it’s nice when cool characters have such decidedly uncool names) and seeing Mark Strong not play a bad guy was a more than welcome surprise. Sofia Boutella delivered another of the film’s notable performances, thriving and thrilling in her considerable screentime as Valentine’s intimidating and often frightening muscle Gazelle. Oh, and some guys named Michael Caine and Mark Hamill were pretty good, too.

I’m not sure at what point the allure of dark, gritty takes on stories will fade for me (I honestly don’t see it happening), but there is more than enough room in my heart for wild and outlandish but still smart and competently told stories like Kingsman: The Secret Service. This is a movie that had a clear vision of what it wanted to be and what role it wanted to fill and then took every reasonable effort to meet those visions, returning to and (in my humble opinion) surpassing the origins of the spy action movie. Considering how widely those movies are beloved, that’s an accomplishment worth recognizing and part of why Kingsman is so worth watching.