In last week’s unfairly lambasted episode of Mad Men “New Business”,  Don settled his divorce with Megan by writing her a check for a million dollars. He’s no stranger to solving problems with a check and a ballpoint pen but this time felt different. After Megan shrewdly tells him what we all knew from the beginning, Don realizes he is a ghoul that “feeds on everyone’s pain,” infecting everyone around him. Marie-Calvet is leaving her husband after being “poisoned” by New York. Megan gave up her role in a daytime soap to move to Los Angeles because that was Don’s original plan. Now, she is so desperate to land a role that she even contacts Harry Crane for lunch. Thankfully, she’s not desperate enough to give in when he invites her up to his hotel room.

Megan was never meant to be in this slimy world that Don thrives in. Remember how ridiculed she was for setting up a surprise birthday party for Don in Season 5? Everyone is so cynical. While money isn’t the answer, it is the first step for Megan to begin a new life. And I believe Don didn’t write that check absentmindedly. His desire to change has been evident since Freddie Rumsen instructed Don to “do the work.” In this season, he yearns to cure Diane of her heartache because the person she reminds him of is not some other woman, but himself. While fans have protested against Diane and accused Don of falling into the same traps, I believe Diane is different and Don is behaving differently. However, despite attempting to do right this time, Diane, in typical Don Draper fashion, chooses to run away because she doesn’t want to forget the pain of deserting her child. Once again, Don can’t find what he is looking for. Like the empty apartment he returns home to after Marie cleaned everything out, Don is a shell. Can Don finally strive to become a more fulfilled human being now that he has a clean slate?

In last Sunday night’s episode “The Forecast,” we finally see a glimmer of hope in Don’s horizon, even after being cut down to size again. This week was all about the future and the question running throughout the episode is “And then?” The episode begins with Melanie, Don’s real estate agent, entering his pathetic home only to find patio furniture inside his living room and a half-naked Don oversleeping. Any other season a woman would swoon over a half-naked Don, but this time he looks “old” and “sloppy.” Melanie has some potential buyers and she does not want them to cross paths with Don for fear that it might poison their interests.

While I understand the symbolism Matthew Weiner was going for between Don and his apartment, it is also quite a stretch that Melanie would have such difficulty selling the apartment. Sure, it “reeks of failure” but it is still an apartment in the upper-east side. Perhaps it’s more proof of Don’s downfall; he can’t even hire a decent real estate agent. As if Melanie’s insults weren’t bad enough, Don’s character is further questioned by Mathis. After getting fired from an account for listening to Don’s ill-advised tip, Mathis recounts a story to Don about how Lee Garner Jr. used to want Don in the Lucky Strikes meeting only so he could fantasize about him. If you don’t remember, Lee Garner Jr. was responsible for the firing of Salvatore Romano after he made advances on Sal. Mathis accuses Don of lacking character, and that he is just another handsome face. 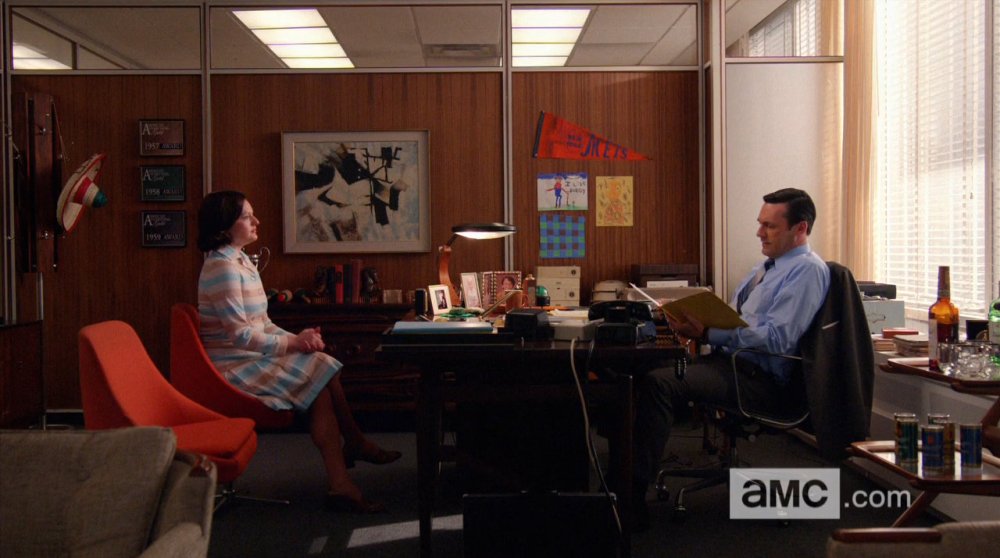 Once at the office, Roger tasks Don with the responsibility of drafting a letter, a Gettysburg Address-type if you will, on the future state of the company. This sends Don on an existential quest as he attempts to find the answer more for himself than the company. Don asks Ted what his biggest dream is and he says to land a pharmaceutical company. Now that Don doesn’t have to worry about whether the business is going to survive the next day, Don is taken aback that the future is about getting bigger accounts. This is jarring for a man who once said that happiness is the moment before you need more happiness. Peggy doesn’t offer him any answers either as she tells him she wants to be the first female creative director. As Don continues to ask her, “And then?,” Peggy responds with more career goals and dreams. After Peggy snaps at Don for throwing out questions about the meaning of life and not the job, Don replies, “So you think those things are unrelated?”

Meanwhile, with only four episodes left, Weiner is creating a sense of finality with his other players. Glen Bishop returns only to be sent away for good. After he pays a visit to Sally Draper, who I will get to later because Kiernan Shipka steals this entire episode, he also finally reunites with Betty. Glen tells them that he’s enlisted in the Army and he’s going to Vietnam soon. While Sally storms off, Betty calls him a brave man. This prompts one of the most awkward, albeit unsurprising, scenes in the history of the show. 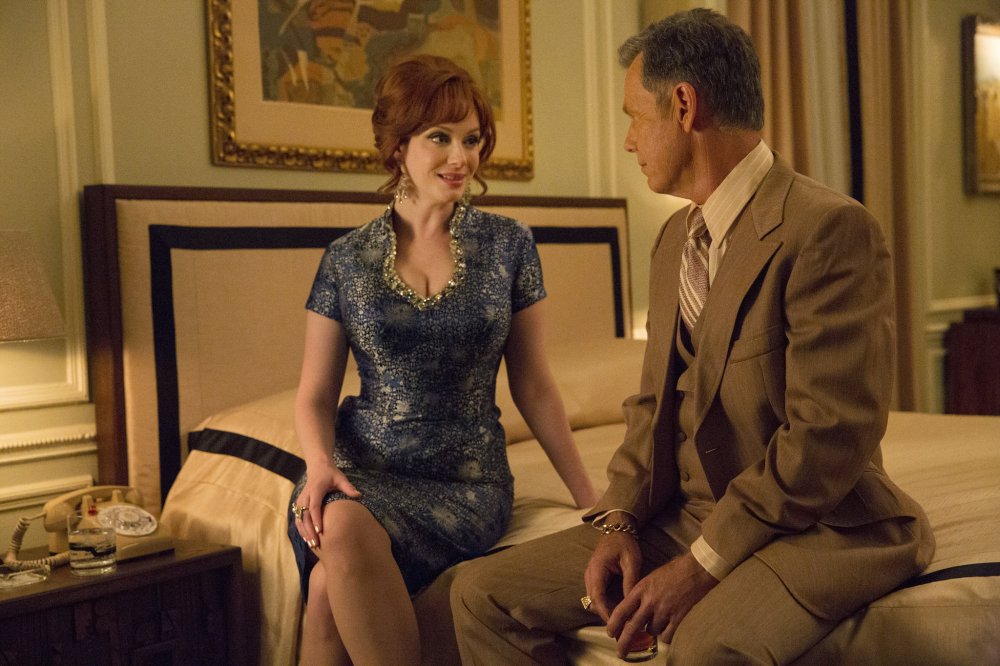 Joan is also centered heavily in this episode as she meets a new man in her life. After flying to the LA offices for business, Joan meets Richard, who is wonderfully played by Bruce Greenwood, in a charming little meet-cute. Of course! They’re in Hollywood. Although I hate Joan for turning on Don the last few seasons, I am rooting for her love life to succeed considering her track record with sleazy men.

However, the star of this episode is Sally. I’ve always considered her to be one of the most important characters on the show. While she often stood in the periphery, Sally seemed destined for something greater as her innocence gets tested, as she becomes a witness to the real world. One of her most memorable scenes is in “The Arrangement,” when after learning about the death of Grandpa Gene, she watches as a Vietnamese Buddhist monk sets himself on fire on TV. Sally has always been an eye witness to the cultural and political turmoil and the dysfunctional relationships between her parents and the people around her. It is not surprising that Sally notices when Betty flirts with Glen and her 17-year old friend hits on Don. While she underestimates her parents, her assessment of Don and Betty is not off the mark, “Anyone pays attention to either of you, and they always do, and you just ooze everywhere.” While her friends have goals and dreams of becoming senators and UN translators, Sally just wants to get on the bus and leave her parents for fear of becoming like them. 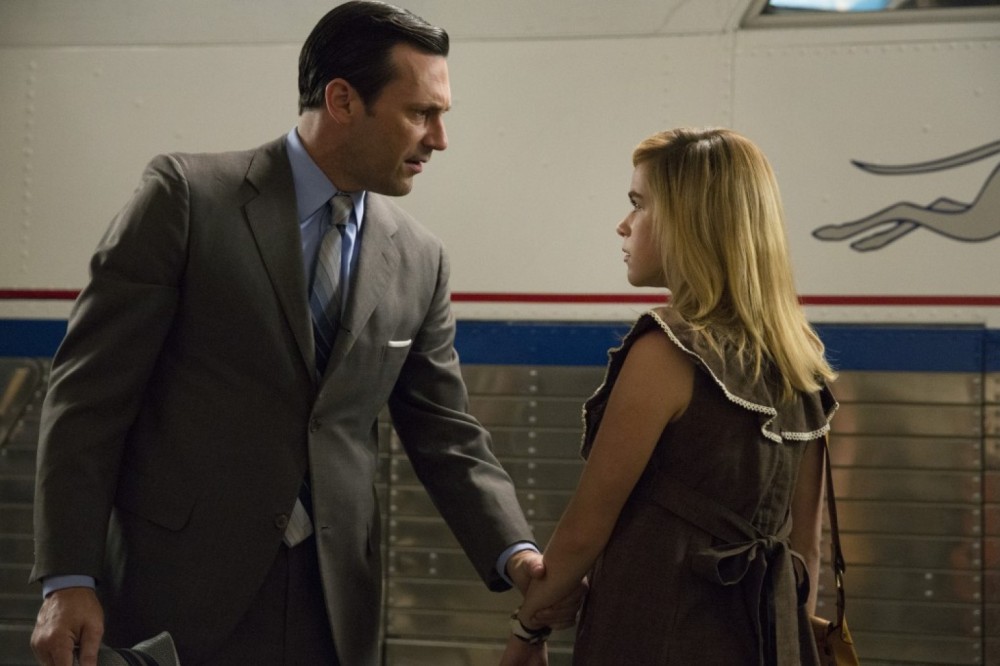 While Don may never figure out his purpose and future, I believe Weiner has set a course for him towards self-fulfillment, and that is to become a better father. As Don tells Sally, “But you are like your mother and me. You’re gonna find that out,” he doesn’t mean it as a compliment but as a warning. “You’re a very beautiful girl. It’s up to you to be more than that.” It is touching to see that when faced with such a dark prospect of your child desiring to run away, Don comes through as a parent. Notice Jon Hamm’s reaction as he delivers the line and the final shot of the episode. It is as if a dark cloud has been lifted. Will Don translate this change to something else? Perhaps he will become a wiser mentor for Peggy, who is slowly morphing into Don. Whatever it is, there is a glimmer of hope for Don.

– Kiernan Shipka deserves an Emmy nomination for this season. The scene where she calls Glen to apologize and the one with Don is simply brilliant. Credit must be given to Matthew Weiner for finding and nurturing such an amazing talent at such an early age.

– Jon Hamm has to win an Emmy this year. It’s long overdue.