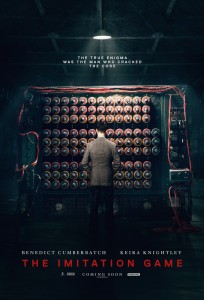 The Imitation Game has been quite a crowd-pleaser because it is both a satisfying thriller and a poignant biopic. Taking the center stage of the film is Alan Turing (Benedict Cumberbatch), an idiosyncratic and socially awkward British mathematician and prodigy. Turing was hired to crack Nazi Germany’s Enigma, a code used by the Germans for military communications during the darkest times of World War II. Unraveling it would more than tip the balance in favor of the Allies. It would shorten the length of the war and reduce the number of lives lost. However, oddball that he is, Turing’s drive to break the code has less to do with defeating fascism and more to do with a playful desire to solve “the most difficult problem in the world.” Unlike his fellow code-breakers, Turing believes that no single or collective mind can possibly defeat the Enigma. The only means to defeating a machine is with another machine. Turing conceptualized a machine that can think and adapt, a machine that would ultimately become the computer.

As with any other biopic centering on the troubled genius (The Social Network, A Beautiful Mind, Amadeus), the strongest aspect of The Imitation Game is the social conflicts between the protagonist and everyone around him. First, credit must be given to Benedict Cumberbatch for his portrayal of Alan Turing. Cumberbatch has already developed a reputation for playing these sorts of misfits, including Sherlock Holmes and Julian Assange. He also recently signed on to play Marvel’s next superhero, Dr. Strange, a self-obsessed doctor who possesses mystical and magical powers. The proof is in the pudding.

In a typical but saucy scene between Turing and Commander Deniston, played wonderfully by Charles Dance, we get our first inkling of Turing’s oddity as an uncompromising superior and a wunderkind exchange wits. Turing’s presence will not be a walk in the park. His team of code-breakers at Britain’s Government Code and Cypher School at Bletchley Park eventually learns this when Turing belittles them and isolates himself to work on his machine. His peculiarities prompts Hugh Alexander (Matthew Goode), a playboy and leader of the bunch, to suggest that in order “to pull off this irascible genius routine, one has to actually be a genius.” The only real ally for Turing is Joan Clarke (Keira Knightley), another offbeat genius who can solve puzzles quicker than Mr. Turing. Unlike Turing, Joan is charming and warm. Joan coaches him to be less socially repugnant in order to get all the help he can get from his team. In a funny scene, Turing offers apples to his team as a peace offering. Of course, this would pay off when Hugh and the team stop Deniston from shutting down Turing’s machine.

While predictable and conventional, it is this area of the film that breathes life into the movie. The weakest aspect of the film, one which I feel was a missed opportunity, is when the film flashbacks to Turing’s childhood and flash forwards to the 1950s, when Turing is being investigated by Detective Nock (Rory Kinnear). While this is a strategy that bookends the tragic circumstances of Alan Turing’s life, the film does not do enough to address his sexual orientation.

In the flashback scenes with young Alan Turing (Alex Lawther), we are once again given the conventional treatment of the prodigy whiz kid getting bullied in school. After an episode where he is nailed beneath the floorboard in the classroom, Turing befriends a young man named Christopher Morcom (Jack Bannon). Christopher first introduces Turing to a book of codes, which they would eventually use to communicate in class. While the film does not wholly say it until near the end, Turing develops a deep affection and love for Christopher. Flash forward to the 1950s and we learn that Turing was publicly vilified and unfairly punished for engaging in homosexual activities. Forced to take hormonal therapy, or “chemical castration,” the film suggests that it ultimately pushed Turing to commit suicide in 1954.

Based on the biography Alan Turing: The Enigma by Andrew Hodges, I have read that the film, like any other biopic, remains loyal and tinkers with certain facts concerning Turing’s life. According to Hodges, Turing was in fact an apolitical figure. However, unlike the film, Turing was an openly gay man who made no qualms about hiding it. While it is not my job to tell the filmmakers what to do, it is nevertheless interesting to see how they decide to portray one aspect truthfully and completely alter the other part of Turing’s life. By making Cumberbatch’s Turing apolitical and a closeted homosexual, the act itself depoliticizes the film and brushes aside any relevant conversation about gay issues. The film suggests that the most significant tragedy in Turing’s life is that instead of being awarded with medals for saving millions of lives, he gets punished for being a gay man. In my opinion, the real tragedy, and one the film is too afraid to address, is that Alan Turing helped defeat a fascist state only to realize he was also living in one.