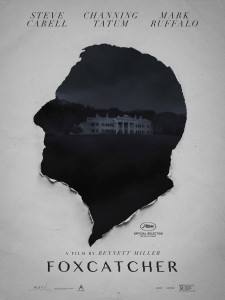 Director Bennett Miller’s films are distinct for its monotone visual palette, cold atmospheres, and bleak narratives. There is an ominous air that permeates through his films that reveals a sense of gravity and portent in contemporary society. Capote focuses on the brilliant literary mind of Truman Capote as well as his moral and ethical denigration in his profession as he exploits his friendship with a murderer for his new book In Cold Blood. In Moneyball, we see the Oakland A’s general manager Billy Beane curtail his team’s economic deficiencies by outsmarting an infrastructure that tips heavily in favor of the wealthy elite. While Moneyball is buoyed by the pomp and circumstance of a sports movie, it is very much a realist and somber outlook of a world between the haves and have-nots.

Now comes Miller’s third feature film Foxcatcher. While it is visually similar to his previous films, it also signals a significant departure for the director. It could be argued that the film displays a maturation of Miller’s craft. Despite the serious undertone of Capote and Moneyball, these films are plump with lively characters and pulsating dialogue. With Foxcatcher, it seems as if Miller cranks it up a notch with his own lugubriousness. The film is so overly self-aware of its own seriousness that watching it becomes a laborious exercise.

The film is based on the true story of John du Pont (Steve Carell), the eccentric billionaire and heir of the chemical company, and his partnership Olympic wrestler Mark Schultz (Channing Tatum). John recruits Mark to live and train in a world-class facility in Foxcatcher Farm, the du Pont’s 800-acre horse farm estate, to compete for the gold in the 1988 Seoul Olympics. While their relationship is the crux of the film, the heart of Foxcatcher centers on Mark and his older brother Dave (Mark Ruffalo).

The brothers have a strong brotherly bond that extends beyond wrestling. They grew up and raised each other since they were children, and they have never stopped caring for each other. Dave is a legend in the wrestling community. Mark is also a tremendous talent but he lacks Dave’s intelligence and discipline to become legendary in his own right. Dave is a thoughtful and warm personality while Mark is a quiet introvert who can easily be mistaken for a caveman.

Taking center stage of the film is John du Pont. Initially, John is a saintly benefactor who offers Mark an opportunity to independently earn a great deal of money and find relevancy in his life. Through Miller’s stark but slow pace, John’s eccentricities and motives become more eerie and alarming. There is an impression that John is a closeted homosexual who feels an attraction to the physicality of wrestling. Miller also paints John as the black sheep of a family who follows a lineage of successful entrepreneurs. Instead, John is a carefree man who spends his time purchasing tanks and target practicing with the police force. John believes that his calling lies with the Olympics. He puts it upon himself to bring home the Olympic gold for America’s wrestling team and restore the nation’s pride. Ultimately, John is a child who struggles to make his mother proud.

Jean du Pont (Vanessa Redgrave) is John’s overbearing mother. Like Livia Soprano in The Sopranos, Jean is the matriarchal figure everyone desperately tries to please. Though she is a woman of little words, Vanessa Redgrave injects total authority with her presence. In one of the most uncomfortable and memorable scenes in the film, John amateurishly takes over wrestling practice to impress his mother’s penetrating gaze. Let’s just say she is far from being impressed. The film slowly unwraps John’s lunacy as he begins to forge himself with self-importance and relevancy as he manipulates Mark and Dave for his own personal desires.

I have to admit that I was a bit skeptical when I heard Steve Carell was cast to play John du Pont. While I do not find the performance that memorable, Carell also appears to be the perfect choice considering he spent seven seasons playing Michael Scott in The Office, the incredibly self-absorbed and out-of-touch boss who works detrimentally hard to fit in and please others. The only thing that separates the two characters is a distracting prosthetic nose and psychopathic tendencies. Carell manages to capture the sad allure of a pathetic man who has the luxury of being born into a family of immense wealth but is also cursed with the inaptitude to carry on the family name. Yet, John remains an emotionally detached enigma. Unlike Philip Seymour Hoffman (Capote) and Brad Pitt (Moneyball), Steve Carell doesn’t have the privilege of working with a great screenplay that fleshes out the characters. Channing Tatum’s performance also suffers from Mark’s lack of depth and complexity. The only performance that delivers is Mark Ruffalo’s as Dave is the only character with any sort of motivation, integrity, and drive.

Overall, the film is a huge disappointment because it simmers and simmers but the film never pays off in the end. Since it is based on a true story, the tragic ending isn’t meant to be a huge shock. The film is about laying the groundwork. Yet, Miller fails here because the film doesn’t know exactly what it wants to say. I appreciate Miller’s efforts in establishing a patient and quotidian pace but the film suffocates in its own aimlessness. Capote and Moneyball are films that carry enormous strength and insight. I am not sure if I can say the same about Foxcatcher for it merely carries the appearance of self-importance and self-worth. Like John du Pont, Miller is desperately trying to wow us with a formidable sense of artistry. Like John’s demanding mother, I was unimpressed by the film’s hollow attempts at finding relevancy.