With all the theories out there about how Matthew Weiner’s going to end the series, from Don jumping off a building like in the opening credits to Don actually being the notorious D.B. Cooper, little did we know that Weiner has already been planting seeds about Don’s fate since the first season. After Don spurns Jim Hobart’s advances in “Shoot,” he assures Roger that if he were to ever leave the agency, “it will not be for more advertising.” Later in season three’s “Shut the Door. Have a Seat”, Don again faces the prospect of working for McCann. After Conrad Hilton tells Don he will be their “prize pig,” Don scoffs, “Bullshit. It’s a sausage factory.” Well, we finally get to see how the sausage is made in “Lost Horizon” as Don attempts to settle into his new environment.

It should not serve as a surprise that as soon as Don walked into that Miller Beer meeting filled with a battalion of creative directors, or as Ferg calls a “shirtsleeve operation,” and the research director Bill Phillips begins pitching in a manner that can only be compared to Don’s narrative abilities, we know his fate is sealed. As he stares out the window at the airplane flying above the Empire State Building, Don gets up and quietly exits the room. The only one who notices the departure is Ted Chaough. And based off of Ted’s reaction, it appears that Don isn’t just leaving McCann, but is also fleeing advertising for good. As we reach the final two episodes, the fate of each character is becoming increasingly clear. 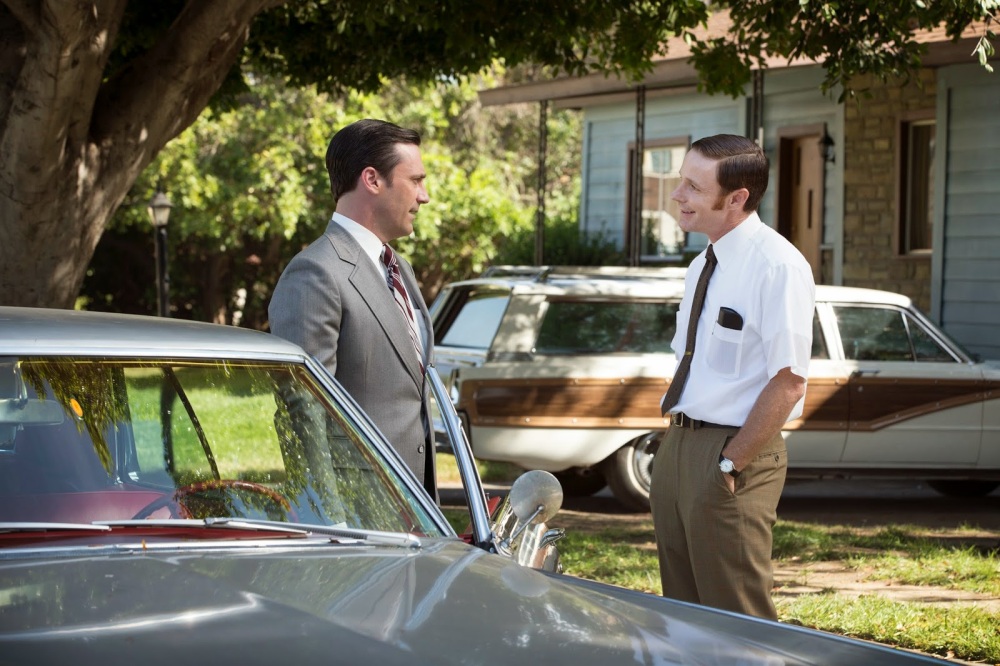 “Lost Horizon” begins with a sense of optimism as the gang attempts to settle into their new offices at McCann. Don gets the red carpet treatment as Jim Hobart gives him a “standing ovation.” But in all actuality, Hobart should have hired a photographer to take a photo of Don dangling from a fishing line because after ten years of attempting to reel him in, Hobart finally caught his “white whale.” Joan is flattered when two women copywriters welcome her to the company and attempt to squeeze themselves into her Avon account. Ted seems perfectly content letting someone else drive during the Miller Beer meeting. Pete didn’t have that much screen time but he is back to his buoyant self. It also made me realize that we don’t give Pete enough credit. He is a scrappy survivor. Pete and Don have always shared a unique bond due to their thirst for success. But to a certain extent, Pete’s capacity to adapt to his surrounding is far more impressive than Don’s ability to adapt new personas. Harry, more than anyone else, regards McCann as advertising heaven; after all, the building is filled with like-minded douchebags. The only ones having trouble with the transition are Peggy and Roger. Someone at McCann forgot to set Peggy up with an office because they thought she was a secretary. And the latter just can’t seem to let SC&P go. There are many great moments in “Lost Horizon” but the scenes between Peggy and Roger are just magic. It’s a shame that in seven seasons of Mad Men, there are only a handful of scenes between the two. We’ll get to them in a little bit.

Back at McCann, it is quite a shock to see Don accept his fate without any fuss whatsoever. Remember, the old Don wouldn’t hesitate to kick out potential clients if they failed to see things his way. The new Don has not only willingly succumbed to his fate, but he’s attempting to make the best of it. Don looks awfully chipper even after getting lost in the maze of offices. (Quick tangent: the sound design is brilliant in the opening scene. Visually, McCann doesn’t feel any larger than SC&P but the ambient sound really sells the agency as a huge, bloodsucking leech.) Don’s happy-go-lucky mood is especially alarming after he politely laughs off Ferg’s terrible impersonation of Don, which was more Dick Nixon than Dick Whitman, and when he appeased Hobart’s creepy request to introduce himself, “I’m Don Draper from McCann Erickson.” Seriously, Jim Hobart is the Devil incarnate. While it feels great to see Don be somewhat at peace with his fate, a part of me wished Don would revert back to his old tendencies. 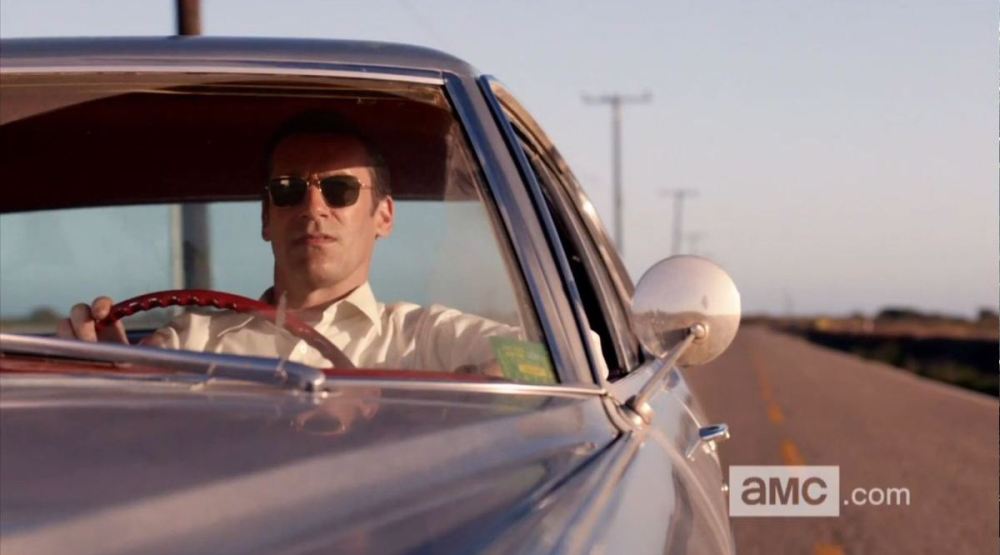 So when Don stood up and left the Miller meeting, I’m sure all of you applauded him for that move. This is nothing new for Don but what is different this time around is that he isn’t escaping a troubled childhood or a severed marriage; he leaves to search for purpose. This leads him to drive all the way to Racine to search for Diane, but not before we get a surprise cameo from Robert Morse. Once again, Don’s hallucination of Bert Cooper reveals things he already knows. Once in Racine, Don learns nothing as Diane’s ex-husband sees through Don’s ruse. He pretends to be a salesman for Miller. This legitimately shocked me because if Dick Whitman can’t even invent a persona without being caught, then where does he go from here (I wonder if Don will ever turn himself in for desertion)? Weiner has always been excellent in selecting songs for the closing credits but using David Bowie’s “Space Oddity” in the final scene, as Don picks up a hitchhiker, is sheer genius.

While Don has given up on McCann, Joan bet big and lost against them. Tired of having her self-worth extinguished by McCann’s unabashedly sexist environment, Joan decides to take it to Hobart himself. However, it doesn’t go according to plan. As Joan threatens Hobart with the idea of women protesting with picket signs, Hobart, who gets everything he wants, doesn’t flinch. His idea of being fair is to pay Joan half of what she is owed so that he never has to see her face ever again. While she rejects the offer, Roger manages to do something he was supposed to be doing all along: look out for them. He convinces Joan to accept the offer. It’s not very often Joan loses a battle. Hopefully, she gets the last laugh. 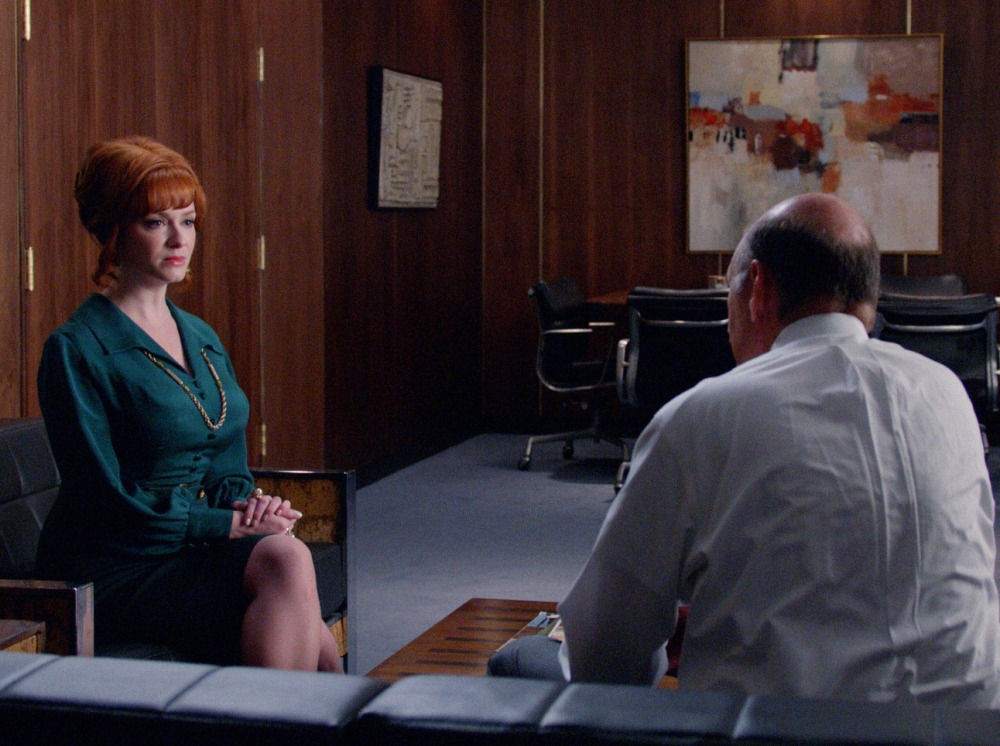 Finally, the scenes between Roger and Peggy are memorable thanks in part to Elizabeth Moss and John Slattery’s chemistry. What is also interesting about their scenes together is that it reveals how far Peggy has come and how stationary Roger’s life has always been. Before his death, Bert told Roger that he wasn’t leadership material. This spurred Roger to take the reins and make a pact with the Devil. Roger feels so immensely guilty for succumbing to Hobart’s scheme that he even gifts Bert’s Japanese painting of the octopus performing cunnilingus on a woman to Peggy. Perhaps Roger has finally realized that Bert was right. It also seems fitting that Peggy should take possession of this painting as she looks at this endeavor at McCann with enthusiasm. As she finally struts into McCann’s office with her sunglasses on, a cigarette dangling in her mouth, and Bert’s painting in her arms, it reminded me of what Don said to her in “The Strategy,” “I worry about a lot of things. But I don’t worry about you.” I’m crossing my fingers that Peggy will unleash a whole case of whoopass on Hobart and McCann. 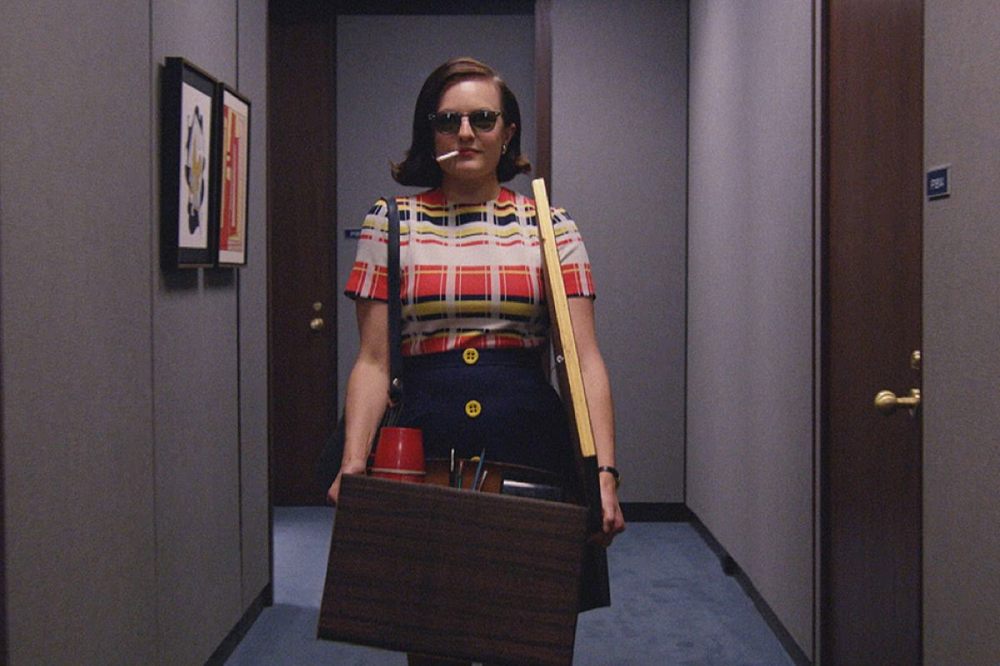 So we’re down to the final two episodes and I am excited for what Weiner has to offer us because the series could easily end with any of these episodes and it would still work. We know Don will never return to advertising but where will he end up? Most likely he’s heading to California but what will he do there? Considering his love for cinema, I would personally love to see Don make his way in the film industry. If advertising was the creative hub of New York in the 1960s, then Hollywood was California’s equivalent in the 1970s. This was the New Golden Age as films like Easy Rider (1969) paved the way for The Godfather, Chinatown, The Exorcist, A Woman Under the Influence, MASH, Mean Streets, Nashville, etc. Considering Matthew Weiner’s penchant for cultural and sociological history, this seems like the perfect spot to place Don in. Now just to be clear, this isn’t a prediction. I just wanted to play the role of Matthew Weiner, and to a certain extent, Don Draper as well.

* I apologize if it seems like I’m rambling in these TV recaps but Mad Men is my favorite television series of all times. These long-winded thoughts are proof of my sheer enthusiasm and love for the show.